this deserves its own thread,

i believe these same guys came up with the stikboards,
http://wackyboards.blogspot.com/2009/07/stikboards.html 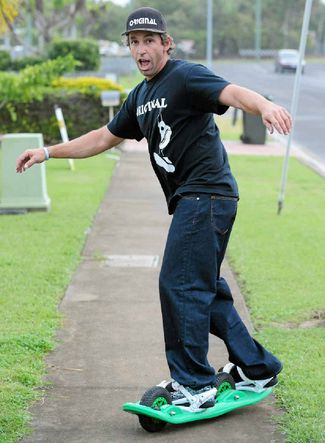 FORGET pushbikes and skateboards - Bundy's young people and fitness fanatics now have a new mode of all-terrain transport, thanks to a Bargara inventor's latest creation.

Demetrias Rejtano, the man behind the Stikboard - a plastic board that is a cross between a skateboard and snowboard - launched his latest invention, 2 Wheel, last week.

"It's a two-wheel mountain board," he said.

"It goes anywhere a pushbike would go, but on a board."

Mr Rejtano has been working on the Stikboard for about 20 years and has received worldwide praise from the industry, most recently at the Sydney Snow Expo.

He said the idea of the Stikboard came to him while he was working as a carpenter.

"I was carving a piece of wood for my friend's 21st and, when I was doing that, this whole invention came to me," he said.

"When you invent something, this weird feeling comes over you - you know no one else has done it."

Mr Rejtano said it took him about four months to develop the concept of the 2 Wheel, doing all the testing himself three months ago.

"I hurt myself a fair bit," he said with a laugh.

The plastic boards are produced by N Mac in Bundaberg, which is producing about 20 boards a week.

"The wheels come from England and the binding comes from America," he said.

"We're hoping to make 600 before Christmas."

And it's not just the young ones who will get enjoyment out of the 2 Wheel, but also adults as Mr Rejtano said the board was the "best abdominal workout you can have".

I dont man Im not feeling it, I guess its not extreme enough...

Two things really bothersome compared to a skateboard:
1. Plastic
2. No way to steer except manual
Personal: I'm not in favor of full bindings except on tricks and trails where you absolutely don't want your feet to come out.
Plus Side: mini mountainboard.
Top

Kiwy wrote:Two things really bothersome compared to a skateboard:
1. Plastic
2. No way to steer except manual
Personal: I'm not in favor of full bindings except on tricks and trails where you absolutely don't want your feet to come out.
Plus Side: mini mountainboard.

Agreed,
Plus, you could bomb a hill stable as Hell at speed.

Negative, put it into a full powerslide at speed and you would grind the deck away especially on asphalt.
2. Ground clearance.
.............

Would love a chance to test out all these wacky boards.
Top